The work of civil society organisations has been key in advancing human rights and environmental issues, as well as in peacebuilding. In Colombia, more than 40 organisations and collectives supported by the NHRF are implementing various initiatives in defence of their rights.

The NHRF's support "has made it possible to make visible the patterns of criminality of the State, through concrete actions such as the presentation of complaints to the Integral System for Peace, and the opening of investigations of high-ranking officials involved in serious violations", adds the José Alvear Restrepo Lawyers' Collective (CAJAR).

Peacebuilding, the fight against impunity and access to justice

The Colombian peace agreement that put an end to more than five decades of conflict with one of the oldest guerrillas in the region is currently experiencing a moment of uncertainty due to the lack of implementation. According to a report by human rights platforms, to date only 4% of what has been agreed has been carried out.

"[But] despite the difficulties, we, the victims, cherish the hope of a different country" Social organisations from the territories affected by the armed conflict say.

Social organisations and collectives are working hard to achieve progress on this historic agreement that represented a step forward for Colombian society. 30 organisations supported by the NHRF have achieved progress in the procedures and decisions of the entities that make up the Integral System for Peace -a mechanism that guarantees the rights of the victims of the conflict. 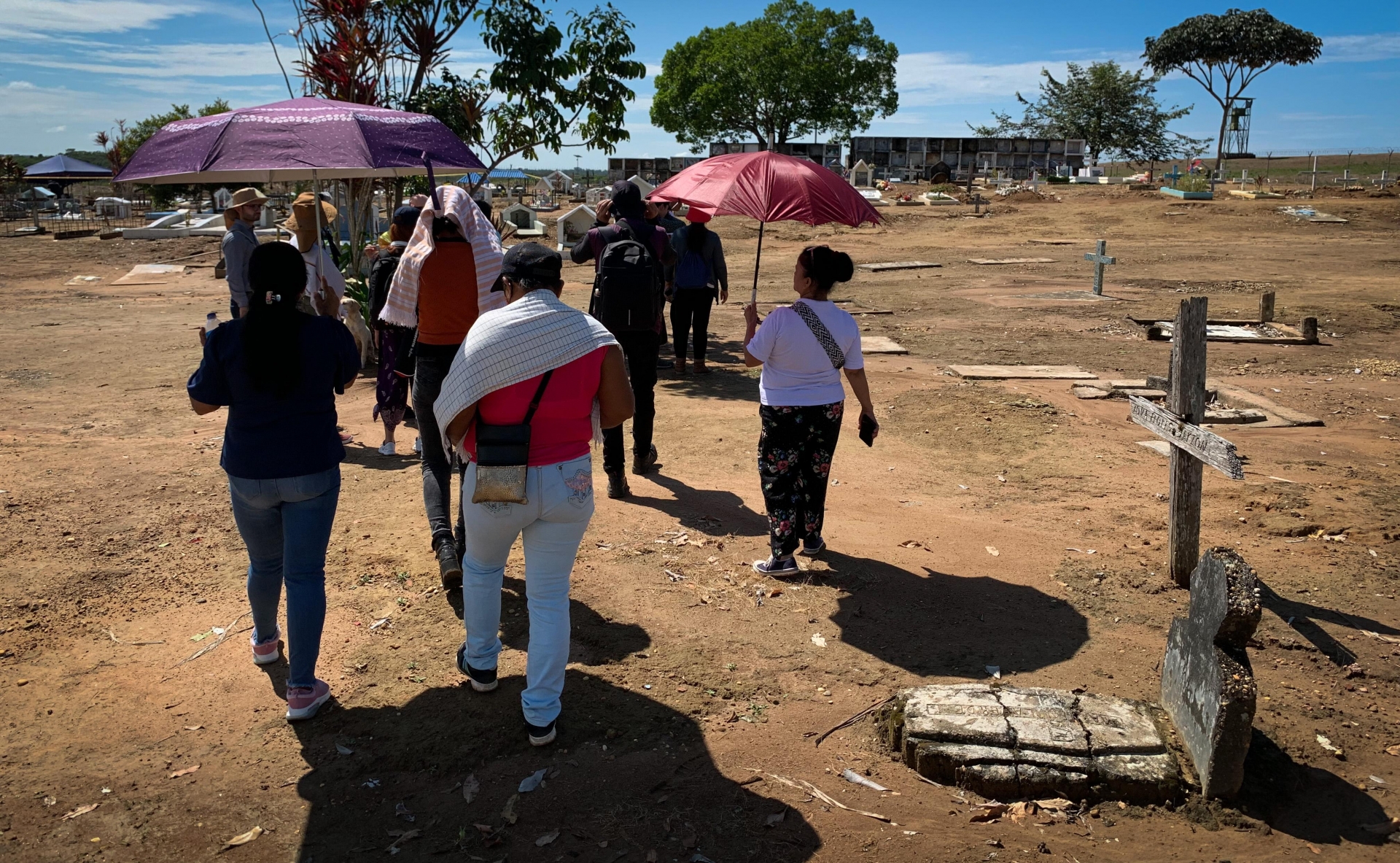 Family members and members of the Socio-legal Collective Orlando Fals Borda (COFB) walking through the cemetery of La Macarena in search of their loved ones.

As part of their work, the partner organisations have accompanied more than 7,000 victims of the armed conflict in their demands for justice and have strengthened the participation of 11,329 people in the Integral System for Peace. Through this participation, the organisations have also been able to produce 48 reports for procedural decision-making by the same mechanism. 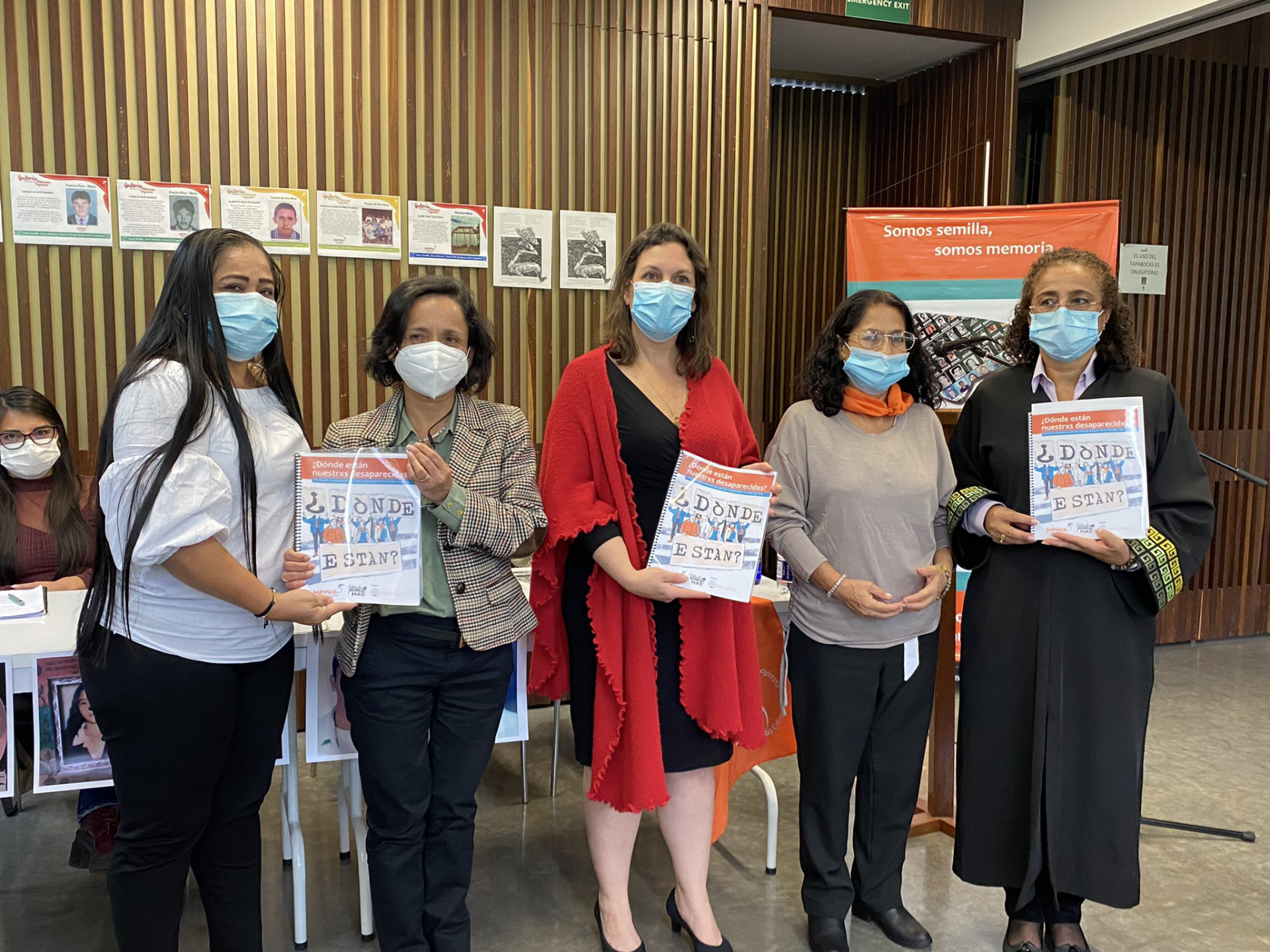 The official launch of the report entitled 'Where are our disappeared?' by the social organisation MOVICE to the Unit for the Search for Disappeared Persons (UBPD), the Special Jurisdiction for Peace (JEP) and the United Nations High Commissioner for Human Rights in Colombia.

Women, a pillar for peacebuilding and the implementation of the peace agreement

The participation of women victims of the conflict in peacebuilding is an issue that, according to feminist social organisations, continues to be at a standstill. Sisma Mujer reports that five years after the signing of the peace agreement, only 20% of the gender measures have made progress: 50% have made partial progress, 26% have made no progress at all and 4% have no information.

"This is a very limited level of progress considering the passage of time and the urgency to stabilise the territories impacted by the conflict, with special attention to the situation of women and girls" The document 'Five years after the final peace agreement: reactivating peace with women' by Sisma Mujer states.

Colombian civil society has taken on the task of ensuring that the construction of peace in the country involves women victims of the conflict. Within the group of NHRF partner organisations, 90% include this population and 67% carry out activities in favour of the inclusion of a gender perspective in the implementation of the peace agreement.

In the same vein, organisations have been on the frontline for the rights of women victims of the armed conflict. 88% of the partners that contributed to improving access to justice and the fight against impunity focused their work on women. 59% working with the Integral System for Peace directly promoted women's participation. 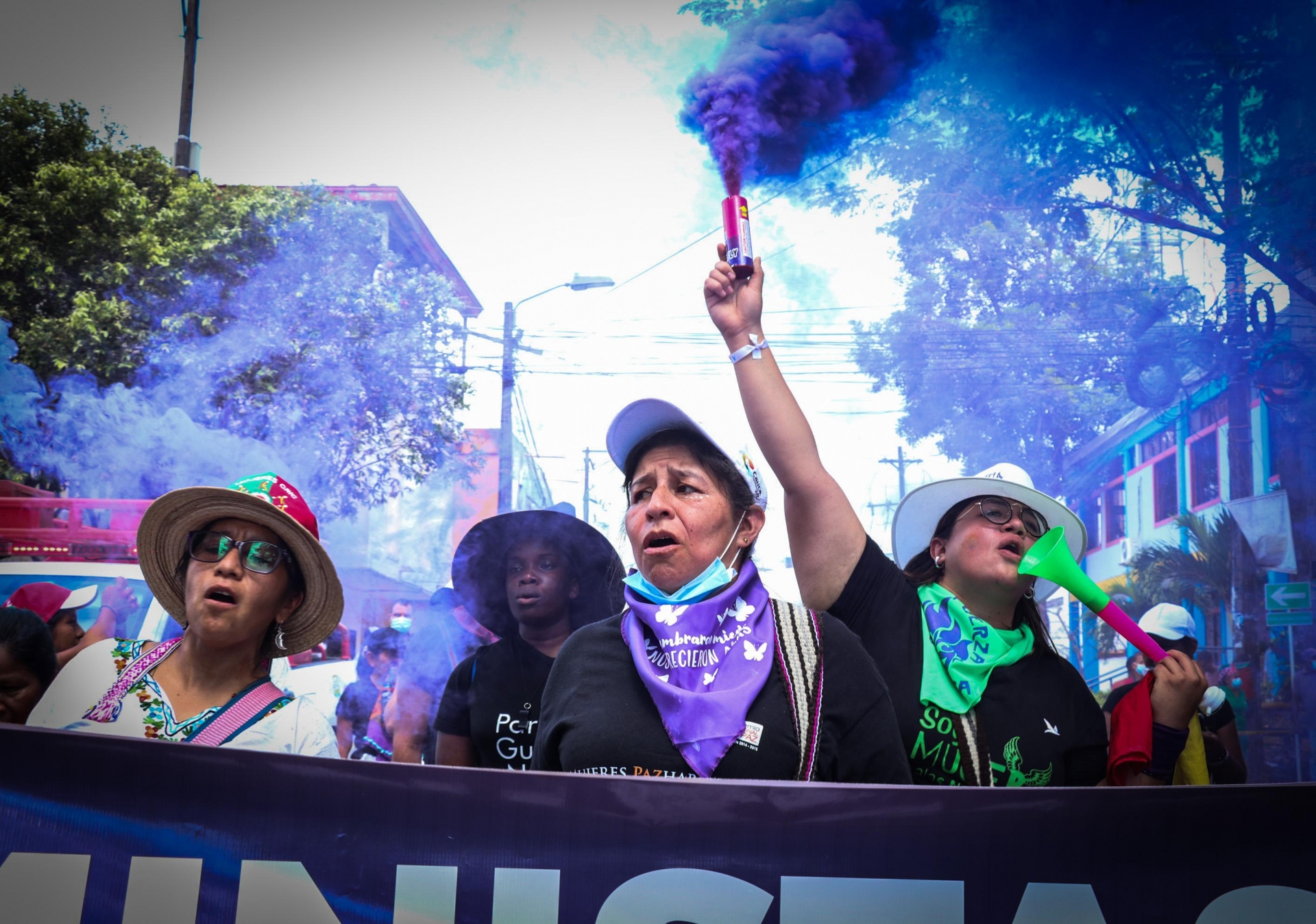 The Peaceful Route of Women (Ruta Pacífica de las Mujeres), one of the most important feminist movements in Colombia, convened the march for "life, demilitarisation and non-stigmatisation of territory", which brought together thousands of women on the International Day for the Elimination of Violence against Women. 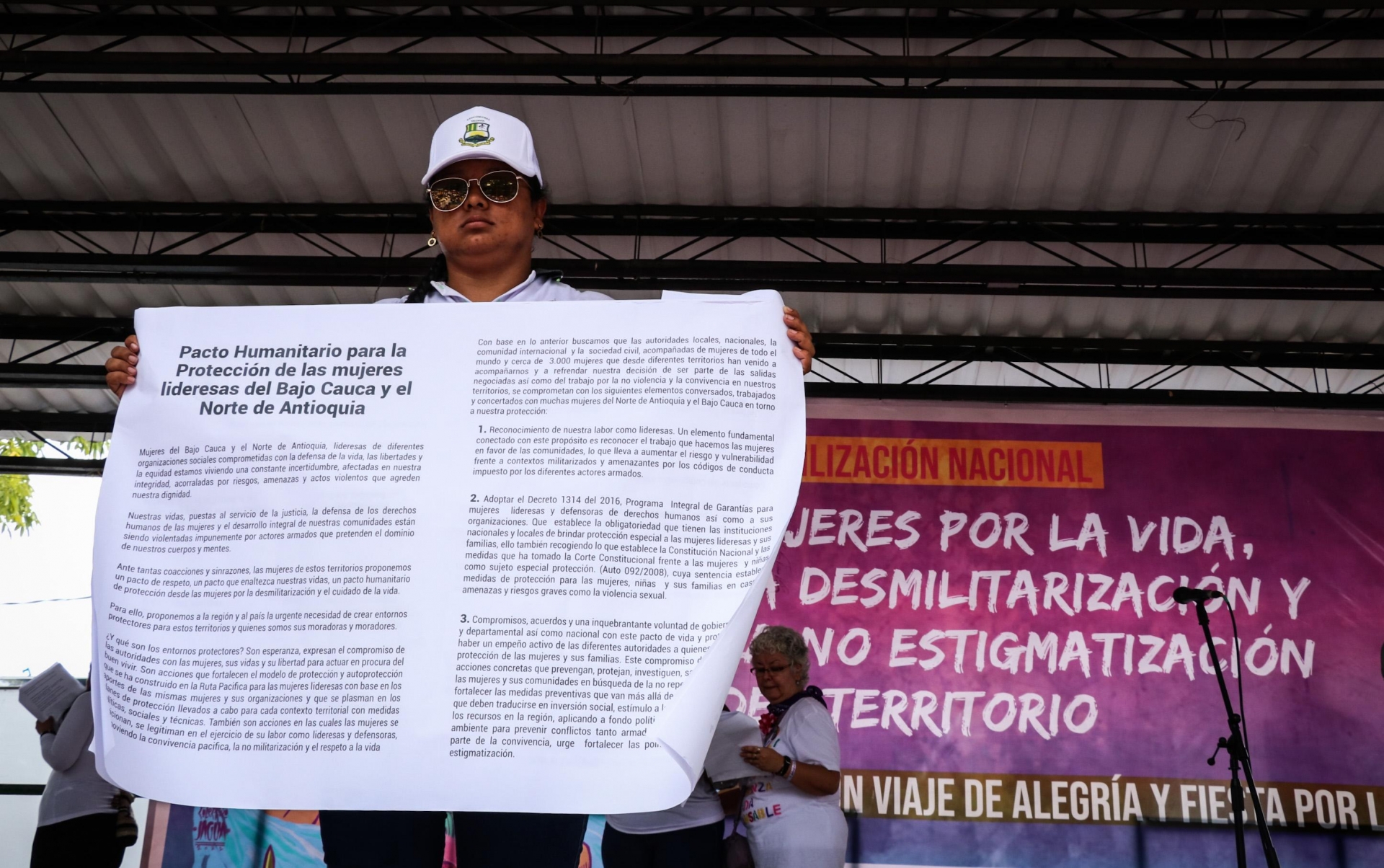 A member of the Peaceful Route of Women (Ruta Pacífica de las Mujeres) holding a manifesto that invites the authorities to follow up on the peace agreement and promote the improvement of the conditions of those who defend rights.

Right to land, territory and the defence of the environment

According to data from Global Forest Watch, Colombia ranks sixth among the ten countries with the most deforested tropical forests. The rate of primary forest loss increased in 2020, from 115,090 in 2019 to 166,485 in 2020.

"Ethnic territories and campesino reserve zones conserve 55% of Colombia's forests, highlighting the important role of environmental organisations and the urgent priority of safeguarding their fundamental rights and territories" Explains the NHRF's Environment, Forest and Climate area in Colombia.

In the Andean country, environmental people and organisations are the ones who defend land and territorial rights. They develop specific activities such as legal actions and strategic litigation, training and consolidation of schools, roadmaps for community advocacy, strengthening of indigenous or rural guards, among others.

The Association of Inga Indigenous Cabildos (ACIMVIP) conducting a reconnaissance of indigenous territory as part of its work to defend and respect the indigenous peoples' rights.

Through the support of the NHRF, more than 20 social organisations have led 183 advocacy actions in Colombia for the design of public policies that guarantee rights. In terms of legal and psychosocial support in socio-environmental conflicts, 78 cases were accompanied, 83 reported positive results. 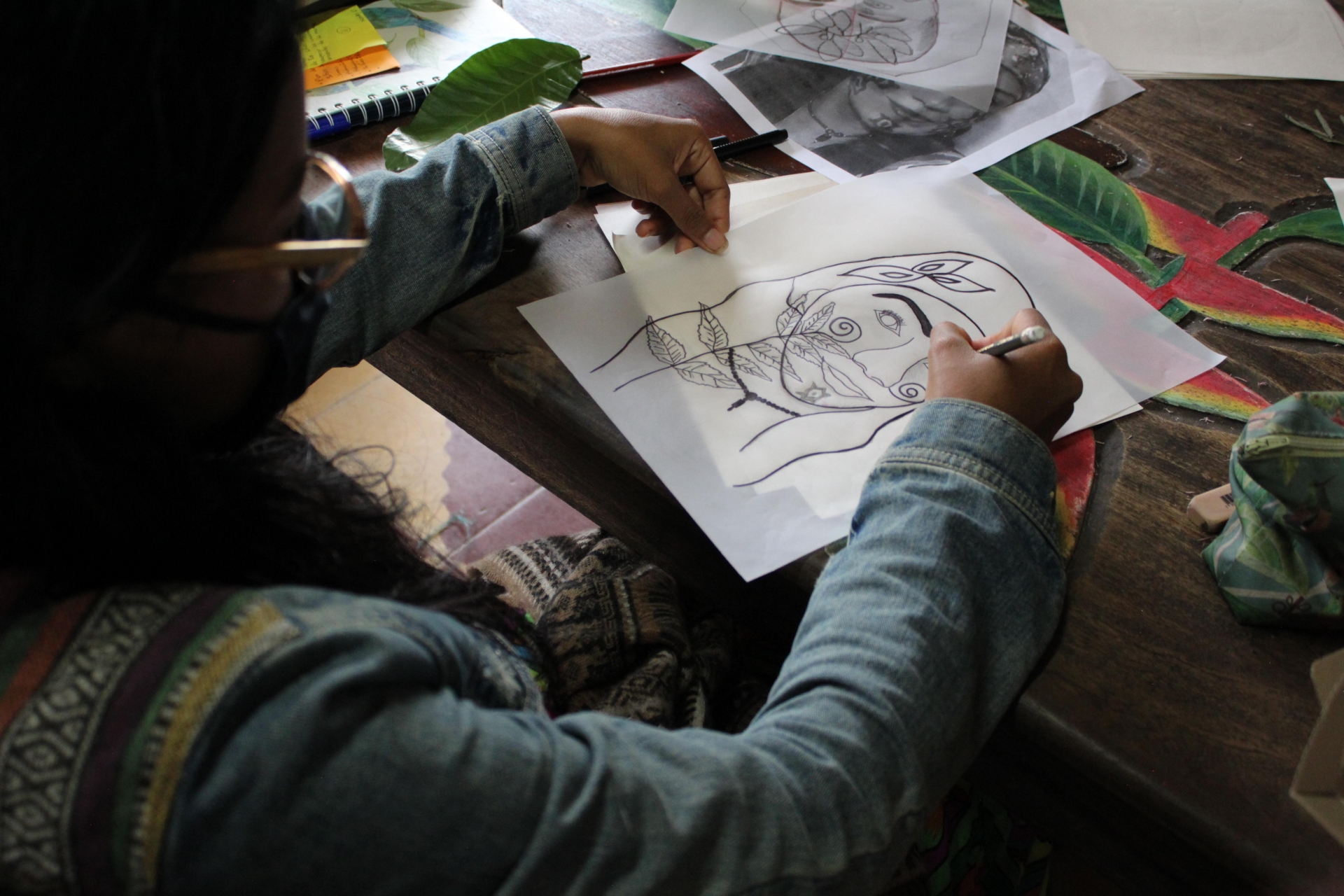 Guarantee for the defence of human and environmental rights

Unfortunately, this work in defence of rights has been accompanied by disproportionate and constant attacks. Colombia currently ranks first globally as the most dangerous place to defend the environment and, in the same line, more than 500 people have been killed for defending human rights since the signing of the peace agreement (2016).

Human Rights Watch has recently said in a report that this constant attack has made the country one of the places with the highest number of such deaths in the world.

Women social leaders and human rights defenders at one of the meetings organised to exchange ideas and identify risks.

In this scenario, international organisations also dedicate part of their support to strengthening guarantees for the defence of rights. As a result of NHRF support, a total of 2,274 defenders and 335 organisations received training on security and protection. 728 people at risk of being killed or threatened received immediate assistance.